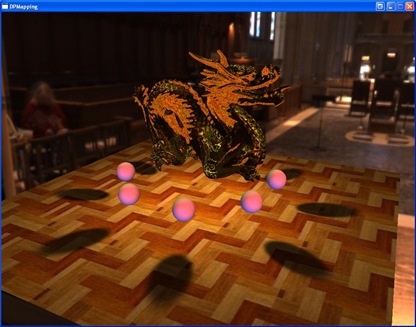 Edit: Added the video that I recently made

I have to say, I really like variance shadow mapping. It's such a simple(ingenious) technique to implement, but it provides such nice looking results. I haven't had the need to implement the technique before, but I'm glad I did. Last post we implemented dual-paraboloid shadow mapping. And those of you with a PS 3.0 graphics card were able to have semi-soft shadows with percentage closer filtering. But now when we get rid of the PCF filter, and replace it with variance shadow mapping, we can fit all the code inside the PS 2.0 standard. Anyway, on to the code.

Variance shadow mapping is really simple to implement. First thing we need to change is to create either a RG32F or RG16F surface format for our front and rear shadow maps (instead of R32F/R16F). This allows us to store the depth of the pixel in the red channel and the squared depth of the pixel in the green channel. So our new pixel shader for building the depth/shadow maps is this:

So, after we have created our depth maps, we will blur them with a separable Gaussian blur. This will perform two passes on each shadow map; the first will perform a horizontal blur and the second will perform a vertical blur. There is a wealth of information on the internet on how to do this so I won't explicitly cover this. Here's what our front shadow map looks like after being blurred: 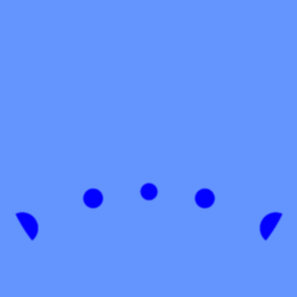 We build our texture coordinates exactly the same as the previous method of shadow mapping. But the depth comparison is a little different. You can refer to the VSM paper for an in-depth discussion, but here is the gist of it. Since we filtered our shadow maps with a Gaussian blur, we need to recover the moments over that filter region. The moments are simple the depth and squared depth we stored in the texture. From these we can build the mean depth and the variance at the pixel. And as such the variance can be interpreted as a quantitative measure of the width of a distribution (Donelly/Lauritzen). This measure places a bound on the distribution and can be represented by Chebychev's inequality. 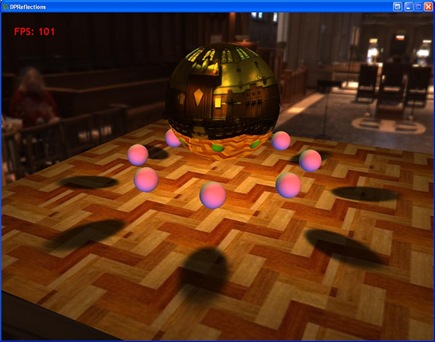 And there you go. Nice looking dual-paraboloid soft shadows thanks to variance shadow mapping.

As before, your card needs to support either RG16F or RG32F formats (sorry again Charles :) ). You can refer to the VSM paper and demo on how to map 2 floats to a single ARGB32 pixel if your card doesn't support the floating point surface formats.